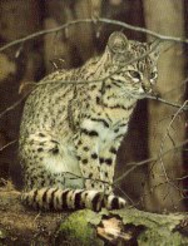 The Geoffroy's cat is South America's most common cat and lives in parts of the Andes Mountains, Pampas grasslands, Chaco shrub and woodlands. It prefers the scrubby woodland of the Pampas and avoids open grass areas. The Pampas grasslands are in parts of Argentina. They have a thick cover of grasses, with patches of scrubby forest. The climate is often humid, with not too much rain.

The cat can weigh 4.5 to 7.5 pounds. From its head to the base of the tail, it can be 18 inches to 30 inches long. Its tail is 9 to 15 inches long. At the shoulder it is 6 to 10 inches high. It is about the same size as a house cat. The cat's colors can be different from animal to animal. In the north the color can be brown and yellow, because it lives in mountainous areas. In the south it is gray in color. Its coat is covered with black spots and sometimes black stripes. The stripes and spots also help to camouflage the cat. It has a rounded head, and medium sized legs. It has short fur in the summer and longer fur in the winter. Its head is as big as a house cat head. Males are larger than the females.

The Geoffroy's cat has large, rounded ears which help it to hear its prey in the thick stands of grass. It has razor sharp claws which help it to climb, and to stab and hold on to its prey. It is a good climber and swimmer. It can swim across rivers up to 100 feet wide. It can also catch frogs in the river. The color changes from north to south and the stripes and spots make it camouflaged.

The mating season for the Geoffroy's cat is in the early spring. It can have one litter per year, and 2 to 3 kittens in a litter. At birth the kittens can weigh 65 grams. After mating, the father takes no part in the care of the kittens. The females are pregnant for 72 to 78 days. The kittens are born in a rocky area, and their eyes open 10 days later. The females are sexually mature in 18 months. It takes 2 years for the male to become sexually mature.

The cat is a solitary cat, with a home range of about one square mile. It can live to be 10 to 15 years in the wild.

The Geoffroy's cat hunts small lizards, insects, and rodents. It can catch frogs in the water and insects off the trees. It can also catch fish, as it is such a good swimmer.

The only known predator of the Geoffroy's cat is man. Man often killed the cat for its fur, to make fur coats. It is one of the few predators on the Pampas. It shares its grassland niche with another small cat called the Kodkod. The Geoffroy's cat likes dense ground cover while the Kodkod likes open grassland which keeps them from competing with each other.

Although it appears to be plentiful, the Geoffroy's cat has been hunted extensively in the last decade for its beautiful pelts, so people could make fur coats. As many as 150,000 pelts are traded each year. This has made conservationists worry that the cat might be in danger. But laws have been passed to protect the cat. The sale of pelts was banned in Europe in 1986 and 1992. It is now listed on the CITES Appendix 1 which restricts sale of its pelts and capturing the cat for the pet trade.