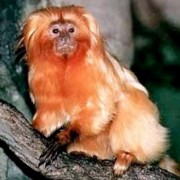 The Golden Lion Tamarin is one of the most endangered mammals in the world. This Tamarin monkey is nearly extinct primarily because of its magnificent mane. Poachers desire this monkey's hide as they can sell for as much as twenty thousand dollars on the black market! This species of tamarin's hair is the color most people call strawberry blond, but redder. The thick coat of fur is longer around this monkey's bare, grayish face compared to its medium to long length body hair. The texture of the fur is silky, almost like a young cat or kittens. The mane around the face looks like a lions, and that's how it got its name, Golden, describing it has golden reddish mane, Lion because the fur around its face looks similar to a lions, and Tamarin as that is what species of monkey they are.

The Golden Lion Tamarin's eye's are quite large, and are hazel to dark brown colored. The nostrils on the face of this tamarin have very wide spacing. Looking at its entire face it is bare, flat, and the head, throat, ears, cheeks and shoulders are decorated with golden fur. The shape of this Tamarin's head is round and small, but the mane gives it a larger appearance. Their body types are slender, due to the fact that they weigh one to two pounds (14-29 oz). The Golden Lion Tamarins body has the shape of a small cat, and a squirrel combined. As easy as we lift a finger these acrobatic creatures are able to jump like a cat a space of fifteen feet between two trees; and their squirrel features are evident looking at their bodies: a tail (12.5-16 in.) longer than their head and bodies put together (8-14 in.): and little paws with sharp little claws. Their hands are like ours with five fingers, are long and thin, and unlike human hands their hands are webbed slightly and instead of flat fingernails Golden Lion Tamarin's have long claws.

Golden Lion Tamarin live in the coastal lowland Amazon rainforest of Brazil. The exact latitude and longitude would be Latitude: 5 degrees N - 15 degrees S Longitude: 35 degrees W - 65 degrees W. This monkey's habitat of lush rainforest is usually in the canopy layer, which holds plants such as grasping vines, thorn clung trees and dangling mosses, ferns, cacti, orchids, vines, and bromeliads. In fact ninety percent of the worlds vines are in the rain forest.

Out of all of the arthropods (insects, spiders etc.) that Golden Lion Tamarins eat, one of their favorites is crickets. These Tamarins are diurnal hunters, and since they are Omnivore's they eat other varieties of food, such as the fruit of the rainforest and very small birds. They obviously have many predators, observing how endangered they are. Their predators consist of poachers, snakes, ocelots, bamboo rats, wild dogs, and owls. Since they are social and family loving, to protect themselves from predators they mob their predators. They are usually with groups of two to eight family members. Also when they are alone in a tree and an owl comes swooping over, as a survival strategy they flatten themselves against the tree, and grip the tree as hard as they can.

The Golden Lion Tamarin's gestation period is 125-132 days, and usually one or two offspring are born. If two are born they are most often non-identical twins. When these Tamarins are born they are covered all around with fur and their eyes are unusually open. For the first few weeks of these little babies lives they will cling to their mothers fur. After about four weeks these tiny babies are ready to eat solid food, and at three to five months old they can be on their own, but separated from their family for too long, they can die of loneliness. Golden Lion Tamarin fathers play a dominant roles in raising young. The young stay with the father until they're ready to nurse with the mother, and then, when they're finished they go back with the father again. The older siblings of the young Golden Lion Tamarins help teach and raise them also. At about fifteen months the mother sends the daughter away to find her own family to live with, in order for incest not to happen. The father does the same thing to a son who's sexually matured. Golden Lion Tamarins can live approximately ten to twelve years, and approximately twenty-three years in captivity.

For many happy years the Golden Lion Tamarin was classified as the most common of Tamarins in captivity. Now their status is extremely endangered and they are not the most common tamarin in captivity. In fact only about four-hundred Golden Lion Tamarin remain in their wild rainforest habitat! Their endangered lifestyle can be explained by a few different reasons. The pet trades poachers are ravaging this tamarin's numbers and will try and sell one for twenty thousand dollars, risking two years in jail. Also, Golden Lion Tamarins live in an endangered ecosystem, have predators hunting them every way they look, are harassed with parasites, and have few dependable food sources. This Tamarin is protected by the Washington National Zoo Reintroduction Program (headed by Ben Beck), because the National Zoo helps breed these creatures. When they have enough of them, they hold their little hands, and walk them back out into their wild habitat. Sadly, only 30% survive. Golden Lion Tamarins are also protected by the Chicago Brookfield Zoo, and a pair of Golden Lion Tamarins have been released into the Amazon Rain forest by the Oregon Zoo. Beautiful, furry, little creatures like the Golden Lion Tamarin should be kept alive and we should put in every effort to protect them from harmful references.