There are over 15 million trees in just the Andean zone. The exotic plants have grown close to the Polylepis forest causing shading of the native trees. In the Polylepis forest there are 20 evergreen tree species that are characterized by gnarled shapes. The trees have a thick and dense laminated bark with small green and gray leaves. Loss of high mountain forests is considered the major cause of water scarcity in many parts of the Andes. A lot of forest birds live in the Polylepis forest. The Polylepis forest is a very bright colored forest.

Polylepis is a group of tree species belonging to the rose family. Fifteen species of the Polylepis genus grow in South America, from northern Venezuela to northern Chile and Argentina. The highest number of species grow in Ecuador, Peru and Bolivia.

The forest has to adapt to the unstable water supply. Birds had to adapt to the small range sizes. The Peruvian Polylepis forests contain three of South America's endangered birds. Great colored parrots and toucans live in the forests, as does the Royal Cinclodes. The forests are vegetated with little-leafed plants. Polylepis trees are evergreens, so they begin photosynthesis as soon as the weather gets warmer. The small leaves prevent water loss (cold, dry conditions). The thick, red peeling bark on the trees protects them from animals and fire damage. 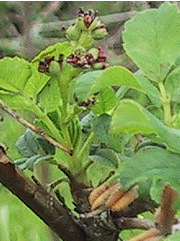 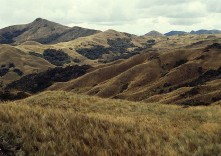 The Tropical Polylepis woodlands are highly endangered. The forests began disappearing during the time of the Incas, when much of its wood was used for building material and firewood. After the conquistadors brought their sheep and cattle, more forests were lost to grazing. Today native peoples still use the wood for building and heat. Loss of the forests have caused landslides threatening villages and roads. Only 10% of Bolivia's original Western Cordillera Polylepis forests remain. Only 1% of the forest survives in the Eastern Cordillera where eight out of nine of Bolivia's Polylepis species grow. Loss of the habitat is rapidly destroying one of Ecuador's most precious treasures: the natural diversity. There is a project going on to help the Polylepis forest. The project involves buying 400 acres of native Andean forest. By purchasing this land, they can replant it with Polylepis trees and stop water erosion.