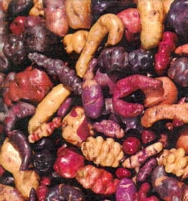 The wild potato is a relative of the cultivated potato, and is found in the alpine biome of the Andes Mountains. In Latin, the word alps means high mountains and the word alpine comes from the word alps. The weather conditions in the alpine biome are severe. Plants have to survive in extreme temperatures, heavy snowfall and strong winds. You can find the potato in places in the Andes where the the temperature ranges from 60 to 70 °F during the day, and frost at night. Most of the wild potato plants are hard to find, and grow in few places. Wild potatoes are found in thickets and waste areas.

Wild potatoes are found in 16 countries. Bolivia, Peru, Argentina, and Mexico are where 90% of the wild potatoes are found. There are about 199 species of wild potato. In the northern Andes, farmers grow potatoes in the lower Paramos. The Paramos are at 3000 and 4000 meters above sea level. The central Andes have a climate that is semi-arid. Potatoes are grown on the Puña or Altiplano which are high altitude plains. The southern Andes has a dry Mediterranean like climate, where farmers can grow potatoes easily.

The part of the potato we eat are called tubers. These tubers grow underground on their roots. The potato is also called the white potato, to tell it apart from the sweet potato. The wild potato was first cultivated by Indians near Lake Titicaca, who grew the earliest potatoes approximately 8,000 years ago. Wild potato tubers have been found in the mountains and plateaus of Peru where the climate was too cold for wheat or corn. The tubers were easy to store and transport. Frost resistant varieties were developed by the the Mochia, Chimu, and Inca. They even found ways to freeze-dry the potatoes. The potato was worshiped by the Inca people. They prayed to potato gods to ensure the success of their potato crop because it was the only crop they could grow at the high altitude of the Andes. The name potato comes from the Indian name papa.

The wild potato plant is a member of the Nightshade family (Solanaceae). Wild and cultivated potatoes have very thin skin. Potatoes can have four different colored skins, reddish-brown, brown, white or pink. Wild and cultivated potatoes have tapering roots that grow year after year. These roots grow from two to eight feet in length. Potatoes can have as few as three tubers and as many as twenty on their roots, it depends on the kind of potato. The weather and soil conditions effect how the plants grow and how many tubers they will have. Potatoes from the Andes are oval shaped, or long and thin, and they can also be round. Potatoes have bell shaped flowers that are white, purple or pink, that grow on vines. The leaves are dark green, heart shaped and coarse with small hairs covering them. The potato plant that grows above ground can grow to four feet tall, with vines that can grow up to fifteen feet. Potato plants have small green tomato like seed balls that hold about three hundred yellowish seeds. The wild potato came to Europe after Pizarro defeated Peru and sent the wild potato culture back to Spain in ships.

Ancient Incan farmers grew potatoes at different altitudes. This gave them many varieties that adapted to the high altitudes. The harsh conditions of the alpine biome force the potato plants to grow close to the ground. Short hairs on the leaves collect water from the clouds, which is an important source of water in the arid climate of the Andes. They also insulate the leaves against sudden frosts. The tubers are used to store water, sugars and starches below the frost line. 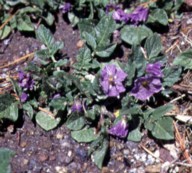 The potato is still grown throughout the world. The wild potato is most useful as breeding stock to help create new disease resistant adaptations. Some of the diseases are bacterial or fungus such as rhizoctonia, late blight, scab, and ring rot. There are also virus conditions such as mosaic, spindle tuber, and leaf roll.

The potato is used for food, and is a popular plant because it can be grown in many countries, therefore large populations can depend on it for food. The potato is very healthy because it is high in nutrition, and is made up of mostly water. Starch, protein, vitamins, and minerals make up the rest of the potato. Potatoes are also grown world wide for use in the fast food industry.

The wild potato is an endangered species and most species are rare. There are about 93 different species in Peru and 39 in Bolivia. Scientists are trying to register many of the original strain of wild pototoes that remain before they are cross-cultivated with other varieties and disappear. Some things that harm the potato are insect pests, diseases, or late blight. These can be controlled by insecticides or fungicides.

"Biomes of the World"
http://www.snowcrest.net/geography/slides/biomes/alpine.htm

"Potato: A Fragile Gift from the Andes."
http://www.grain.org/publications/set003-en.cfm

"The History of the Potato."
http://idid.essortment.com/potatohistory_rvap.htm