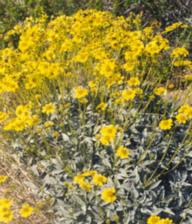 The brittlebushis a common plant of the Mojave and Sonoron deserts. It is a small deciduous shrub which grows as a low, roundish mound 2 to 5 feet high. Brittle branches sprout from a woody trunk. The leaves have serrated edges, and are broader at the base than at the tip. They are about 1 to 4 inches long. The leaves are covered with a thick mat of short hairs giving a gray-green appearance. Many desert plants have this kind of hairy leaf. The hairs form a blanket over the leaves and act an insulating layer against the heat and cold. They also trap any moisture that is in the air, and reduce the amount of water lost to dry air.

The brittlebush flowers from March to June, turning the desert bright yellow. It's a member of the sunflower family and its flowers resembles the sunflower, only in miniature form.The flower is disk shaped, on long bare stems, rising several inches above the mound of white leaves, giving an impression of a layer of color over the plant.. It has a solitary head with a dark yellow-orange to purplish mound of disk-corollas from which radiate 1 inch yellow rays with a lobed, squared off tip.

Brittlebush can be found growing in the coastal chaparral and interior valleys of southern California, east to the creosote bush scrub, Death Valley through the Mojave Desert and the Colorado Desert, and south to Baja California. It likes to grow in dry slopes and washes. In most of these areas, the brittlebush and creosote bush dominate the vegetation.

Brittlebush has had many uses in the past. The stems of the brittlebush secrete a clear resin which was used by Native Americans from the Southwest as a glue and also as a gum. Ground up it was used by the Seri Indians of Mexico as a toothpaste. They also would sprinkle the paste on sores or heat it and spread it on their bodies to relieve pain. The early Spanish missionaries burned it as an incense.

Mule deer and desert bighorn sheep browse on it, and kangaroo rats will eat its seeds, but aren't all that fond of it. Other than that, it isn't used for domestic livestock. Brittlebush is most useful for rehabilitating landscapes, and stabilizing disturbed areas. It is used in Arizona to minimize erosion near highways. It can be easily transplanted and grows well from seeds. The brittlebush is very abundant and is not on the endangered species list.