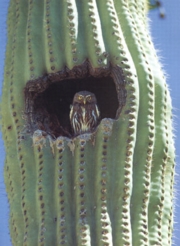 For a tiny bird, the cactus ferruginous pygmy-owl has a very long name. It is small enough to hold in your hand. It averages 6.5 inches (17 cm) in length and weighs only 2.5 ounces (62 g). Females usually weigh a few tenths of an ounce more than the males. The feathers on their back are creamy-brown, and the underside is cream-colored with reddish-brown stripes. The top of their heads are slightly streaked and on the back of the head they have two black eye spots outlined in white. Their eyes are yellow and round. Their tails are longer than most owls, and they have no tufts on their ears.

Cactus ferruginous pygmy-owls live in the desert habitat of southern Arizona in the southwestern United States, and northwestern Mexico. They live at elevations below 4,000 feet (1,200 m). The owl prefers desertscrub thickets, trees and large cacti for nesting and roosting. In the Sonoran desert the owl often lives where ironwood, mesquite, acacia, saguaro and organ pipe cacti can be found. The vegetation provides good cover for its favorite prey of birds, lizards, insects, small rodents, frogs and earthworms. Cactus ferruginous pygmy-owls are fierce hunters and can kill a dove twice their size. The vegetation also shields it from larger birds of prey. The pygmy-owl is diurnal and hunts during the day.

Cactus ferruginous pygmy-owls don't migrate. In late in the winter or early spring they begin nesting in the cavities of trees or cacti like the saguaro and organ pipe. These holes have often been made by woodpeckers. They lay 3 to 5 white eggs in late April, which hatch about 28 days later. The young owls are fed by both parents. They fledge, or leave the nest about 27 to 30 days after hatching. They stay close to their parents until they are ready to be on their own. 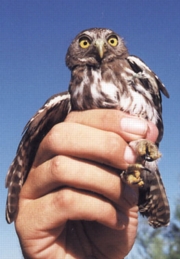 This small owl' future is in grave danger from the loss of its habitat. It used to be very common and could be found in Arizona from the New River north of Phoenix to the Mexican border. Now they can only be found between Tucson and the Mexican border, and less than 50 remain in the state. Most of the owls live in the ironwood forests northwest of Tucson and Marana. They live in the fastest growing areas of Tucson. People are moving into the desert, changing the environment to suit their needs, and destroying the forest's fragile ecosystem. Logging, woodcutting and livestock overgrazing are other threats the pygmy owls face.

A federal judge removed the pygmy owl's critical habitat status in September 2001. She stated that the U.S. Fish and Wildlife

consider the economic impact when it designated 731,000 acres critical habitat for the cactus ferruginous pygmy-owl in 1999. The U.S. Fish and Wildlife Service is expected to redesignate their critical habitat by April 2003, and it is hoped their habitat will double as a result. It is presently on the U.S. Endangered Species List. They are also in the CITES, Appendix II which allows the owls to be traded commercially only if it doesn't harm their survival.

Photo of pygmy owl in saguaro courtesy of the Arizona Game and Fish Department.

Photo of pygmy owl in hand by Michael Terrio.