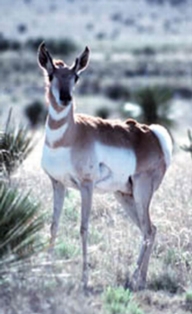 Pronghorn Antelopes are native to America and are found nowhere else in the world. They are the last surviving member of the Antilocarpidae family. Once they were as abundant as the buffalo. But by the 1920s only about 13,000 animals remained. Due to conservation and range management there are now about 500,000 pronghorns in the United States and Canada. The Mexican population isn't doing as well and it is estimated that only 1,200 animals remain.

Part of this dwindling population consists of the Sonoran Pronghorn Antelope, a desert sub--species of the pronghorn. Only about 480 animals remain in North America and they are on the brink of extinction. They are found only in two small areas of the Sonoran Desert of southwestern Arizona and northern Mexico. In Arizona they are found in alluvial

valleys, separated by mountains and mesas. It rains in the winter and summer, but spring and autumn bring very dry, arid weather. The landscape is dry and sparsely vegetated with cactus, creosote bush, tumbleweed, and ocotillo.

Smaller than a white-tailed deer, the Sonoran pronghorns stand less than 3 feet at the shoulders. Their overall body length, including their short tail, is 48 to 57 inches. Males can weigh 90 to 130 lbs. and females 75 to 110 lbs. Females are about 10% smaller than the males. The upper part of the Sonoran pronghorn is a rich tan color. Their underpart, rump , and two bands across their neck are white. A short 2-4 inch black mane runs down the back of their neck. Males have a black mask and black cheek patches.

Their eyes are set high on their heads, and are very large in comparison to their body. They can see something moving as far as 4 miles away. The pronghorn has a unique ability to raise patches of its stiff, hollow hair to release body heat in the hot summer. In the winter months the hairs insulate them against the cold. The pronghorn also has very special horns. Both males and females have antlers. The female antlers are short. The male has large, straight pronged antlers about 12 inches long which curve back at the ends. They are made of an outer sheath of black keratin which grows around a permanent bony core. After the breeding season they lose the sheath, but the short horn underneath remains. Next year new antlers grow back over the bony horn. 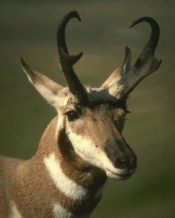 Sonoran pronghorns are lightly built and have long, slender legs which allow them to run faster than any mammal in North America. They can reach speeds of 60 miles per hour for short bursts, but can run at 35 miles per hour for long distances. Both their speed and keen eyesight help them avoid predators. They are able to make the white hairs on their rump stand straight up to signal danger. This white flag can be seen from a long distance. Their one weakness is their curiosity. They will often return to see what scared them in the first place. Native Americans and early settlers used this weakness to lure them into a trap by waving a piece of cloth or branch.

Pronghorn does can breed at 16 months, and bucks are ready when they are 1 year old. The Sonoran pronghorn breeds from July to September. Their gestation period is about 245 days. The doe gives birth to 1 and sometimes 2 fawns which weigh about 5 to 7 lbs. She will hide her fawns in separate places in dips or swales, and come back to feed them twice a day. The fawns have no smell, and lie very still, which makes it difficult for predators to find them. They are weaned at 4 to 5 months and reach their mature size at 6 months.

Pronghorns are ruminants. They have a four part stomach which lets them digest rough textured food and get more moisture from it.

The Sonoran pronghorns are listed on the U.S. Endangered Species Act, and endangered by the IUNC, or International Union for the Conservation of Nature. It is also listed as CITES Appendix I. The Convention on International Trade in Endangered Species is a United Nations treaty which regulates international trade in wild animals and plants. Poaching, habitat loss from overgrazing of cattle, and restriction of movement by fencing (pronghorns don't jump) are all threats to its survival. Fawns are vulnerable to coyotes, bobcats, and golden eagles.

Photo courtesy of the US Air Force