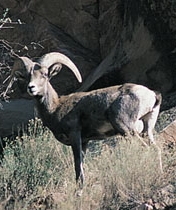 Desert bighorn sheep is a subspecies of the Rocky Mountain bighorn sheep. It's preferred habitat are steep slopes on, or near mountains, with a clear view of the surrounding area. They have excellent eyesight and can spot predators from a long way off. They live in small pockets of dry desert mountain ranges, foothills near rocky cliffs, and water when it is available. They exist in a barren, mostly waterless environment in the Mojave and Sonoran deserts on the North American continent

The desert bighorn sheep have a solid, stocky, and muscular body on short legs. They are not as stocky as the Rocky Mountain bighorn, and their horns are

flatter and spread out more from their heads. The horns can weigh as much as 30 lb (14 kg). Their muzzle is narrow and pointed, while their ears are short. They have very acute eyesight which helps them gage distances when jumping from rock to rock. Their sharp-edged cloven hooves are elastic and concave. Their coat is smooth and made up of an outer coat of stiff guard hairs and a short, wavy undercoat. In the summer it is a rich, glossy brown color with a white rump patches. By late winter the color fades.

The males, or rams, have huge brown horns with horizontal ridges. They curl back over the ears, down and up again past the cheeks. The females, or ewes, have smaller horns that never get larger than half a curl. Bighorn sheep have a double-layered skull honeycombed with bone struts to protect their brains during their impressive head-banging battles. Thick tendons link the skull and spine to help recoil from the impact. The rams weigh from 119-127 kg, and measure 160-180 cm from head to tail. Ewes weigh 53-91 kg and are approximately 150 cm long.

Yews and rams usually gather in same sex groups, and go their separate way when they are not breeding. During the summer lamb-rearing season ewes stay in the upper levels of the mountains. In late fall and early winter the rams will gather up to 12 ewes into a harem. They don't defend territories, but battle other males over mating access to the females. Rams will charge each other and smash their heads together in impressive and loud battles. Age and the size of its horns determine the dominant status of a ram. Males usually don't mate until they are seven years old.

The average life span of a desert bighorn is approximately 9 years. Most sheep live for more than 10 years, except when they become overcrowded, in which case their life span is only 6-7 years. The females are led by an old ewe. Young females will usually stay with their mother's group, but the males leave when they are 2-4 years old to join a group of rams.

Desert bighorns have a long lambing season. In the Mojave Desert it begins in December and ends in June. A few lambs are even born during the summer as well. Mating can last from July to December. Their gestation time lasts about 174 days. They will have from 1-3 lambs. The females will choose a steep and safe area for the birth and raising of the lambs. The lambs are able to quickly follow their mother after only a week. Within a few weeks the lambs gather in small bands of their own, and search out their mothers only to suckle. They are completely weaned by 4-6 months. A disease has been documented in Mojave and Sonoran desert bighorns which results in high death rates for lambs from pneumonia. This disease can continue for several years and results in large population declines.

Bighorns are ruminants, which allows them to digest grass, even when it is dried out. They are mostly diurnal and will feed on and off throughout the day on a large variety of plants. The eat grasses, sedges, and forbs. They will also browse on shrubs and trees like the desert ironwood when their preferred food is scarce. The desert bighorns need water about every three days in the summer. Some wildlife refuges construct artificial water holes. However, desert bighorn sheep get a lot of their moisture from the food they eat.

The Rocky Mountain bighorns and the desert bighorns of the Mojave and Sonoran deserts are descended from the wild sheep of Central Asia. Before the last ice age the ancestors of North America's bighorn sheep crossed the Bering land bridge from the Mongolia and Tibet.