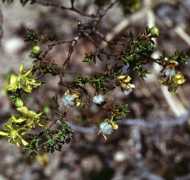 The Creosote Bush is named that way because it smells a lot like the creosote tar that is used on telephone poles to preserve the wood. This shrub is mostly found in the southwest part of America and the northwest part of Mexico. You will most likely spot this plant in the desert slopes and plains of Utah, Nevada, California, Arizona, New Mexico and, Texas.

The bush's leaves were made into antiseptics and emetics by desert Native American desert tribes. Antiseptics destroy germs, and emetics induce vomiting to clear the stomach of poisons. Although they are no longer used for medical reasons today, they did greatly help the Native Americans in times of sickness.

Well, I have told you of the way that the leaves of the Creosote Bush can be used, but I have not told you about how the bush looks. The Creosote Bush is unique. The bush is a robust shrub that grows very abundantly. The bush is basically a group of 4 to 12 plants that shoot up from one plant in all directions. Some bushes are thought to be thousands of years old.

The Creosote Bush has small (1-2 inch) pointy green leaves that are covered with a varnish. These leaves grow directly from the branches of the bush. The Creosote Bush has flowers that also grow along the stems. These flowers are yellow and about the same size of the leaves. The fruit is small and round with gray or white hairy tufts growing from them.

This bush is very useful to us in our everyday lives just as it was to the Native Americans of the desert. It is, like many other plants, a contributor to the world in a small, but important way.