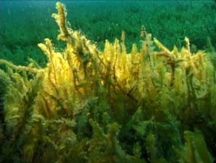 The Calliergon giganteum grows in the arctic tundra which is a harsh cold environment in the Northern Hemisphere within the arctic circle. There are strong winds, up to 100 miles per hour. In the tundra it is very cold: the average winter temperature is -25° C, and in the summer it is rarely over 10° C. The summertime only lasts six to eight weeks. In the winter it is dark most of the time, and even in the summer it is usually cloudy and

overcast; therefore plants get little sunlight. The tundra is also unusually dry; it gets an average of just 30 cm of rainfall per year. The growing season is very short. There is also a major lack of nutrients.

A cool fact about the tundra is that nearly 75 % of it is covered in permafrost. There are many cracks on the surface because of the earth freezing and thawing. This frozen soil prevents water from sinking into the ground, causing many lakes, streams, bogs, and fens (wetlands with a constant high water level) during the summer. Probably the most unique thing about the arctic moss Calliergon giganteum is that it grows in freshwater arctic lakes and in fens.

The Calliergon giganteum is an aquatic plant found growing on the bottom of tundra lake beds and in and around bogs and fens. It is a member of the Siberian tundra biome. Like all mosses, Calliergon giganteum is a bryophyte. They have rhizoids (tiny rootlets) instead of roots. They never have wood stems. They have tiny leaves, usually only one cell thick. There are lots of leaves on the stem. They do not have flowers. They can either reproduce by growing shoots or by sending out spores, which need to be wet to survive. They have two life stages; gametophyte and sporeophyte. There are some ways Calliergon giganteum is unique. It is very slow growing. It grows as slow as one centimeter per year. It also lives a very long time; the shoots live seven to nine years, the leaves live for four. It is brown in color. Its branches are crowded. It is one of the few plants on the tundra. It is "the slowest growing longest living freshwater macrophyte ever recorded" (Amazing Arctic Moss.)

The Calliergon giganteum has adapted well to its cold climate. When it is not growing, it stores nutrients so new leaves can be made quickly next spring. The more leaves the more they can photosynthesize. It is adapted to the incredibly strong winds because it grows near to the ground. Because it can grow under water it is protected from the drying winds and cold, dry air of the frozen tundra. Its long life and slow growth are probably adaptations to the short growing season and the cold.

There are few uses for the Calliergon giganteum. In the arctic, moss covers the ground and warms it up allowing other plants to grow. It is eaten by migrating animals such as birds. Some type of arctic moss was frozen for thousands of years and is helping scientists learn about life on our planet.

The Calliergon giganteum is fairly common. It is one of about 2000 plant species on the tundra, most of which are mosses and lichens.