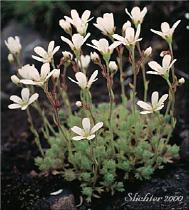 Tufted Saxifrage is a small perennial that grow in thick mats on the tundra. It has several straight flower stems which can get 3-15 cm high. The leaves are rigid and very hairy and only 5-10 mm long. Their tips divide into 3 lobes.

Two to ten flowers bloom from the top of each stem. Each flower has five white petals, that look like a bell when just opening and turn into a star when fully opened. This flower also has a small fruit which usually holds many small seeds.

There are many varieties of saxifrage in the wild. Saxifrages like cool weather. The Saxifrage has a well-developed underground root system forstoring carbohydrates, so that they can respond quickly to the cold weather of the tundra. Saxifraga heuchera is one of the few saxifrages used as an ornamental plant. It grows in the northwestern United States

The Tufted saxifrage grows on the rocky slopes and crevices of the tundra. It can be found from Alaska to the Cascade and Olympic Mountains and northwestern Oregon. Saxifraga comes from the Latin word "rock breaker".