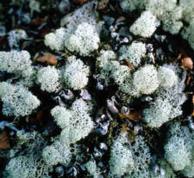 Caribou moss grows in arctic and northern regions around the world. It grows on the ground and on rocks. It looks like a foamy, gray-green spongy mass, and grows to be 1 to 4 inches high. The stems, or stocks, are hollow, and branch out many times. Although it is called caribou moss, it is actually a lichen.

Lichens are two separate organisms. They are made up of fungi and algae, which live and grow together. The spongy threads of lichens support and protects the algae. The algae has chlorophyll which can make food. Each has something the other needs. This is called a symbiotic relationship. Lichen can make food when the temperature gets very low and there is little light. The tissues of lichens aren't easily damaged by frost. This makes it a great plant for the tundra.

Lichen can survive for long periods of time without water. They just dry out and go dormant when there is little water or light. They can begin to grow again even after very long periods of dormancy.

Animals such as Reindeer and Caribou feed on lichen during the coldest periods of the season. They do this because it is one of the only things that they have for food when the weather is cold and there is little other vegetation left. It has lots of carbohydrates that give the caribou energy to make body heat. Caribou have special microorganisms in their stomachs which let them digest lichen. Very few other animals eat lichens. Some scientists think that the caribou evolved to fill the tundra's food niche that other animals couldn't fill.

People are afraid that the reindeer and the caribou are dying from eating lichens. Lichens absorb moisture and nutrients through their surface cells. Pollutants and deadly radiation can pass easily into their cells. The caribou eat the radiation rich lichen and pass it on to people who can get the radiation from caribou meat.

Lichens are commercially grown in Scandinavia to make a powder that thickens soups and desserts. It is very rich in vitamins A and B. The Dena'ina, Native Americans of the area, boil it until its soft. They use it in all kinds of their foods. They also make a tea out of it as a medicine for diarrhea.

It is also used to tan caribou hides so if you don't boil out the harsh acids, it will give you a very bad stomach ache.