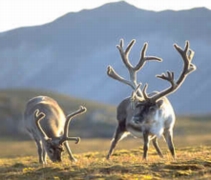 The caribou lives in the arctic tundra, mountain tundra, and northern forests of North America, Greenland, Scandinavia, and Russia. It is estimated that there are about 5 million caribou in the world. They were first domesticated in Norway and northern Asia and known as reindeer. People used them to pull their sleds, provide milk, meat and skins to build their tents. When it was seen how valuable they were, they were brought to Alaska in 1887. Later they were brought to parts of Canada. These North American reindeer became known as caribou. Although they are called by different names, they are both considered to be a single species.

The caribou is a sturdy animal with short legs. Its coat is brown and becomes darker in the summer and lighter in the winter. It has a ruff of long hairs under the neck, and the fur above the hooves and around the tail are almost white. The Alaskan caribou is clove-brown with a white neck and hindquarters.

They are well adapted to living on the tundra. Their large, spreading hooves support the animal in snow in the winter and marshy tundra in the summer. Caribou are also great swimmers and use their feet as paddles. They can also lower their metabolic rate and go into a semi-hibernation when conditions get very harsh.

When it looks like there is nothing to eat on the winter tundra, caribou will scrape the snow away with their wide feet or antlers and eat lichens, dried sedges and small shrubs. In the summer they the will eat leaves of willows, sedges, flowering tundra plants, and mushrooms.

Caribou are social animals and live in huge herds. Males are often loners, until its time to mate, which begins in late September and October. The herds will often have several thousand animals in it. They will migrate more than 400-500 miles to reach winter or summer feeding grounds, and can travel up to 50 miles a day. The caribou's leg tendons make crackling sounds when it walks, which would make a migrating herd an noisy bunch indeed.

Pregnant females will lead the migration to the calving grounds in May, where they will give birth to a single calf. Most females don't breed until they are 28 months old, and will give birth every year. They weigh an average of 13 pounds and grow very quickly, doubling their weight in 10-15 days. Their hair is a reddish-brown. Newborns can walk within an hour and in a few days can run with the herd. Still, wolves, grizzly bears, and golden eagles kill a large number of newborn calves.

Although some people are moving into the caribou's habitat, they seem to have adapted. Only one herd lost its calving grounds when the Alaskan oil pipeline was built, but they seem to have migrated elsewhere. The caribou is not endangered, thanks to its ability to tolerate climates people would rather not deal with.