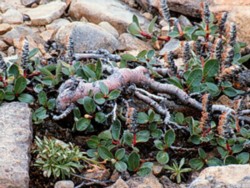 The Tundra can be described as a treeless plain with uneven ground. Each year this treeless plain gets 15-35 cm (6-14 in) of precipitation. There are two seasons in the tundra. They are winter and summer. Salix arctica prefers to live in dry, cold, open places, hummocks in wet sphagnum bogs, sedge meadows, margins of pools, and muddy salt flats in course sandy soil. The Arctic willow likes cold climates, which makes the tundra a perfect place for it because the average temperatures range from -70 degrees F to 20 degrees F.

Salix arctica is 15-20 cm in height. It has many different shapes, but sometimes has long trailing branches that root where they touch the surface. Rock willows/Arctic willows grow prostrate, shrub, and carpet. The leaves are oval shaped with pointed tips, wedge shaped bottoms, and have little stalks. These leaves are 15-50 mm in length. The leaves are dark green on the bottom and a lighter green on the top. They have net like veins and long hairs that cover their leaves. The flowers of the Salix arctica are upright scaly spikes that are unisexual flowers with no petals. The Salix arctica blooms in the spring. They are 5 cm and are dark brown or sparkling pink. There's no fruit on the plant, only seeds. There are no taproots on this plant. The lateral roots are shallow due to the frozen ground underneath the permafrost.

The Salix arctica is very plentiful in the wild, but is still vulnerable because of the delicate habitat it lives in. It has a shallow root depth, which makes them susceptible to root damage. It also has a short growing season. There is also a limited food supply for herbivorous insects. There is also a low N.P.P. (nitrogen/ phosphorus/ potassium) in the North American tundra. This means that the chemical fertility of the soil is low. There are many studies being done on the Salix arctica. Some of the organizations involved are I.T.E.X. (International Tundra Experiment), S.A.G.E. (Sustainable Arid Grassland Ecosystems). International Tundra Experiment placed open top chambers (O.T.C) in order to raise the average temperature a couple of degrees to find out how it affected the plants, insects, etc. Sustainable Arid Grassland Ecosystems studied the arctic grasslands and plants.

The Tundra is a delicate place where tire tracks can last for years. The Salix arctica has adapted well in these frigid non-fertile conditions. In such conditions small changes could drastically affect the Salix arctica.