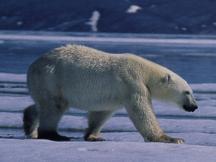 Polar bears can be found all through the polar regions of the Northern hemisphere. They are the largest carnivore on land.

They have a black nose and eyes. They have two layers of fur which is so warm that adult bears can easily overheat when they run. The polar bear's fur is really clear, not white. Some light reflects off the fur and makes it look white. Most of the sun's rays reach their black skin, which absorbs the heat and keeps the polar bear warm. The adult's fur looks darker than the cub's fur.

Their teeth and claws are very sharp so they can catch their prey easily (seal). Their shoulder height can be five feet or more and when they are standing up, their height can be 8-11 feet. Females weigh 660-770 lbs and males weighs 880-990 lbs. Polar bears spend most of their time on drifting packs of ice, eating, and resting.

The bears reach sexual maturity 3 to 5 years after birth. They usually mate in March and have their cubs 7 to 8 months later. Each year pregnant polar bears dig a den in the snow of southern facing slopes, where they give birth. The females gives birth to one or two cubs. Cubs are usually born in December or January. They are naked, blind and deaf. They stay in their den with their mother until March or early April. Then they emerge from the dens. After a few days of getting used to the outside environment, they take little trips to strengthen the cubs. The families then move back to the sea ice and hunt for seals and other prey. The cubs learn how to hunt with their mothers for about two and a half years. They live for 15 to 20 years. Polar bears live alone, except for mothers who live with their cubs.

Polar bears adapt very well to the cold. Ursus Maritimus means "sea bear". The polar bear has a thick layer of blubber around 4.5 inches thick. That and the hollow shafts of their hair provides them with excellent insulation. This allows them to handle temperature of -34°F. Their ears and tail are very short so they don't lose any heat through them. They have a very good sense of smell. Their necks are longer than other bears to keep their head above the water when they swim. They have strong legs and partially webbed front feet to help them swim. Their feet can be up to twelve inches in diameter.

The polar bear is listed as an endangered species. At one time there were only 5,000 polar bears left. In the past people hunted polar bears for their fur. All countries where the polar bears exists have conservation projects and restrict hunting. Today there are about 40,000 bears.

The polar bears aren't safe yet because chemicals are polluting their food stock. The ice packs in the North Pole are melting sooner in the spring, and cutting their time to hunt seals. The major cause of death for young polar bears is starvation.