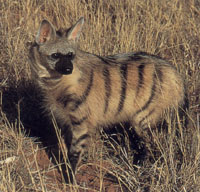 The aardwolf is a furry hyena that looks like a dog, but has long front legs and short hind legs. Aardwolf means "earth wolf" in Afrikaans. Afrikaans is a language spoken in southern Africa. The aardwolf was named like that because they live in underground burrows. The aardwolf can be found from Angola to Zambia and in the Fynbos of South Africa. It also lives in southern Egypt down to Tanzania.

The Fynbos is a Mediterranean biome and is located in the southwest corner of South Africa, from latitude 20° to 33° South, and longitude 17° to 32°East. The winters are cold and wet and the summers are hot and dry. It has many plants found nowhere else in the world. Most of the plants are scrubby with small, leathery leaves. Except for the Bontebok, animals in this region can be found in other places in Africa.

The terrain is mostly grasslands, plains, rocky areas, bushy areas, semi-desert, savanna, and hills, and occasionally you would find a small mountain, or two. The aardwolf, aardvark, termites, hyenas, lions, and several kinds of reptiles and amphibians are some of the animals that live there. The aardwolf inhabits the open grassland plains in the Fynbos where its main food source, the harvester termite, builds its mounds.

The aardwolf is a very small and shy animal compared to its bigger and more aggressive relatives, the hyenas. It is about 15-20 inches from the shoulder to the ground. Its tail is 8-12 inches. The aardwolf usually weighs between 50 and 60 pounds. It is a light buff color, with an orange tint to it. Five to six thick black stripes run down its sides. Its legs are banded with black, and the part under the knee is completely black. Its fur is long and it has coarse guard hairs. It has a mane going down from the head along the back of its neck towards the tail, which is long and bushy and becomes erect when they are frightened. The head of the aardwolf looks like a dog's, except it has bigger and more pointed ears. The aardwolf has big ears to hear termites underground when it is hunting. The ears are also large to help the aardwolf lose body heat. Its eyes are black, rather small, and are facing front, for depth preception. Its muzzle is black, broad, and nearly hairless. The aardwolf's teeth are small, blunt (except for the canine teeth, which are rather sharp), and widely spaced. It has a humped back and low hindquarter. The aardwolf moves like a dog. Unlike a hyena, the aardwolf has five toes on its forefoot, while the hyena only has four toes. The aardwolf also has non-retractable claws to scratch in the dirt to dig for termites. 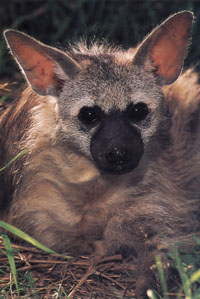 The aardwolf reaches sexual maturity at the age of two years. They mate throughout the year. Its gestation period is 90 to 100 days. The birth interval is one year. The number of young a mother aardwolf can produce is anywhere from one to six, but typically it is between two and four cubs. The cubs are born blind and helpless. Both parents raise the young. The cubs rely on their parents for 16 to 20 weeks. The cubs spend six to eight weeks in the den. After that period, at about three months, the young aardwolves are ready to start foraging with one or both parents. They do that for about a month. At about four months, they start foraging on their own.

The aardwolf is a solitary animal, except when raising young. Several females with cubs may share a burrow. It doesn't have groups because of their sole diet of termites. Animals usually form groups because they need help killing something big, like a lion. Since aardwolves eat termites, they don't need help killing them because they are so small. The aardwolf does not migrate anywhere outside of its territory. There are two distinct populations of aardwolves. One is located in southern Africa in the Mediterranean Fynbos Biome. The other one is located from Angola and Zambia, to South Africa. It marks its territory with a musky fluid from its anal glands (it also does this in defense when it is under attack from dogs, or one of its predators). Its life span is up to 14 years in captivity, and about 10 years in the wild. The aardwolf is a nocturnal animal. It spends the day in abandoned burrows of the aardvark. They pick these burrows because they are usually close to an abundance of termites. Since the aardvark eats termites too, they like to burrow close to a nest of termites.

The aardwolf is a carnivore, but is called an "incomplete carnivore" because it is an insectivore. Its typical diet is Harvester termites (Trinervi termites), insect larvae, and occasionally eggs of ground nesting birds. It has weak, small, rounded, and widely spaced teeth for chewing termites and the other small things that it eats. It has good hearing to locate termites underground. It also has a good sense of smell. The aardwolf has a long, sticky tongue that it uses to lap up the termites in their tunnels. Large amounts of soil may be ingested with the termites when it eats them. On an average night, an aardwolf can consume anywhere from 200,000 to 300,000 termites. The termites usually come out in dense columns, so all the aardwolf has to do is lap up as many of them as it wants to eat.

The aardwolf's long sticky tongue helps it survive in the environment. Its tongue is used for lapping up termites. This method enables it to eat a lot of termites at a time. It has blunt teeth because it only eats small things. Therefore, it doesn't need very sharp teeth to kill big animals, and tear flesh, unlike its relatives the hyenas.

The aardwolf's prey is termites, insect larvae, and eggs of ground nesting birds. It usually eats termites, but occasionally, it will find some carrion that the hyenas have killed, or a small rodent to eat. The aardwolf's predators are lions, leopards, poisonous snakes, larger hyenas, and humans. The aardwolf is not considered endangered in general, but in some places it is because of human hunting. Some humans hunt it for its skin and meat, which is considered valuable.

The aardwolf used to be considered part of the hyena family, but has been placed in a different genus because of major differences in its teeth. Although it looks like a dog, it probably wouldn't be a good pet because it smells like a skunk. Peeeyuuuu!!!!