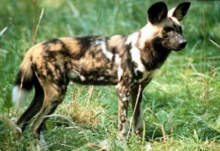 The African wild dog lives in grasslands, savannas, and open woodlands of eastern and southern Africa. They are mostly found in the African plains; they do not live in jungle areas. They also live in parts of Namibia, Botswana, Mozambique, Swaziland, and in the Transvaal of South Africa. The savanna is an open grassland dotted with trees. The grass can grow to be 3 to 6 feet tall. The average temperatures is 64°F. In the savanna there are two seasons; in the winter it is very dry and in the summer there are heavy monsoon rains. Many animals the African wild dog hunts migrate during the dry season. The African wild dogs don't follow them. During migrations the dogs survive on bugs and rodents.

The African wild dog's scientific name literally means painted wolf. Their fur is colored with red, brown, black, yellow, and white areas. Each animal has a different pattern of colors. The African wild dog has short fur. The fur on their muzzle is black and the end of their bushy tails are white. Their ears are very large and rounded. Their muzzle is short and they have powerful jaws.

The African wild dog is perfectly built for the chase. Like greyhounds, they have a light body and long legs. The bones of its lower front legs are fused together to keep them from twisting when it runs. It has large ears which help radiate heat away from its body. Its short and broad muzzle has powerful muscles that allow it to grab and hang on to its prey. Its multicolored coat helps it blend in with the surroundings.

Only the dominant pair of the African wild dog pack breeds. These two stay mates for life and keep other females from breeding. The African wild dog breeds between December and March. The female is pregnant for 10 weeks. Two to twenty puppies are born, but the litter size is usually about 10 puppies. They are probably the size of a regular puppy. The mother will give birth in a grass-lined burrow, and the puppies will stay there for 3 to 4 weeks. The whole pack cares for the pups once they are out of the burrow. The adults take turns to hunt so the pups aren't left alone. They stop drinking their mother's milk after 5 months. A female wild dog will give birth every 12 to 14 months. The puppies reach maturity after 12 to 18 months, but don't breed until they are much older. Their life expectancy is about 10 years.

The African wild dog is a carnivore and feeds on medium sized antelope, gazelle, and other grazing animals. It can also kill larger prey, like wildebeest. Wild dogs will follow a herd of animals until one of the animals becomes separated. They will chase the animal until it drops from exhaustion. They start to feed immediately without a killing bite. African wild dogs always eat fresh kills and never scavenge for food. Like domestic dogs, they don't eat plants or insects, except a little grass.

The African wild dog is on the IUCN's endangered species list and studies are being done on its conservation. Projects to reintroduce them into areas of Mkomazi, Tanzania and into the Etosha National Park in Namibia have been started. The main reason for its decline is that this species is hunted by man. People haven't had much sympathy for the African wild dog because of its hunting methods, and the dogs are perceived as vicious killers of game and livestock. Another reason is disease. The African wild dog is vulnerable to domestic dog diseases like canine distemper, rabies and anthrax.