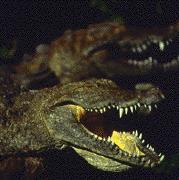 The Nile Crocodile can grow to be five meters long. They have long snouts that can grab fish and turtles. They are dark olive in color, and young ones have bands around their body. But as they get older, the bands fade. They are the most intelligent reptiles on the earth.

Nile Crocodiles live in freshwater swamps, rivers, lakes, and other watery places. They dig dens to hide in from hot weather or danger. They are only found in Africa and Madagascar.

The crocodiles eat almost anything in the water, such as fish, turtles, or birds. They even eat buffaloes, antelope, big cats, and sometimes people, when given the chance.

The female Nile Crocodile mates around November through December. They dig a hole about 1 1/2 feet deep to lay their eggs in, a few feet from the water. They lay 40-60 eggs. The female protects the nest from danger at all times. It takes about 80-90 days for the eggs to hatch. The mother keeps the hatchlings safe by holding them in her mouth.

Nile Crocodiles are sneaky, and get their food easily. When they sneak up on drinking animals, only their eyes and nose show. The rest of their body is hidden underwater. They are also camouflage in the water, so they are almost impossible to see.

The Nile Crocodile is not endangered. They are almost invincible, and are not prey to any other animal, except humans.