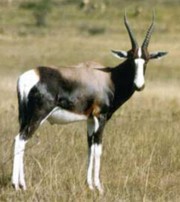 The Bontebok is a type of Antelope. Its head and body are 4.6 - 5 feet in length together. Its tail is 12-18 inches long. Males weigh one 135 pounds; females are lighter and slightly smaller. The Bontebok have deer-shaped bodies. Their hind legs are shorter than their front legs so their back slopes down to the tail. They have a short coat, which is purple - brown. The hair is soft and has an iridescent sheen. They have a white belly and rump and white stockings. Their face is white too. The head is long and narrow with a pointed white muzzle. The eyes are located on the side of its head, like horses. The ears are long, narrow and pointed at the end. The horns are well - developed and are angular and ringed for most of their length. The Bontebok has scent glands on its front feet. Its gait is a lumbering canter about 43 miles an hour. Early morning and early evening are their active times of the day.

The Bontebok lives in grasslands and sparsely timbered regions. They are only found in protected areas of South Africa. The Mediterranean climate is one of dry summers and cool wet winters. There are a large variety of plants and woody shrubs with small leathery leaves. They live in a narrow sector of coastal plains at an altitude from 6200 meters above sea level within the Cape Fynbos zone. The Bontebok need grass, shelter and permanent water.

Two to three males compete for females with posturing displays and ritualistic sparring with the horns. The mating seasons for the Bontebok are March and April (start of the long rains). The gestation period is 7-8 months. The female Bontebok gives birth to a single young. The baby Bontebok can stand and walk in minutes after birth. Young Blesbok lack the white blaze on their foreheads. The mother only raises the lamb and the father leaves after mating season. The young Bontebok and Blesbok follow their mother rather than hide while she forages. The young are weaned at about 4 months but remain with the herd for some time after. When the young males reach about 2 years of age, they join larger, more fluid groups of juveniles. The female Bontebok stays with the mother's group. The birth interval is one year. The adult female Bontebok wanders the territories in groups. They are also found in large herds containing both sexes. The adult male Bontebok has small territories, possibly occupied for life. They feed in the early morning and evening, seeking shade during the hottest part of the day.

The Bontebok is a herbivore; it eats plants, grass, leaves and wild grass. Not many predators are in protected preserves; Caracals, Jackals and Feral Dogs kill some lambs. The Blesbok lives in an artificial environment and doesn't have a niche. The Bontebok was unable to cross the Karoo and adapted to the coastal plain of the Cape Fynbos. It uses markings to communicate with the other members of the herd. The male Bontebok has small territories, possibly occupied for life. They are also found in large herds containing both sexes. The female herds consist of a small number of adult females, with their young in a total numbering up to about 8, which are non - territorial and wander at will over the home ranges of the territorial males. They have seasonal migrations in some areas.

The Bontebok is endangered. It became extinct in most of its range in the 1800s and is considered to be the rarest antelope in the world. They are endangered because of excess hunting, agricultural encroachment and competition with domestic stock for forage and water. They are kept on protected preserves in Cape region of South Africa. None of them are found in the wild. About 15,000 survive in South Africa. The organizations involved in its protection are CITES (Convention on International Trade in Endangered Species) and Bontebok National Park.

The most interesting thing about the Bontebok is that it was separated from the Blesbok thousands of years ago when a very dry strip of land developed called the Karoo. That way they were unable to cross the Karoo and were isolated in the Fynbos.