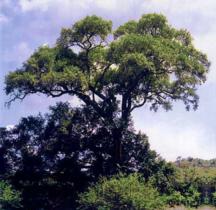 The Jackalberry tree is found throughout Africa, from Senegal and the Sudan to Mamibia and the northern Transvaal. It is most commonly found on savannas or savanna woodlands where it can be found growing on termite mounds. In heavy soils the termite mounds provide the tree with aerated soil, and a source of moisture. The roots provide protection for the termites, who don't eat the living wood. Jackalberry wood is almost termite-resistant after it has been cut down.

The Jackalberry tree can grow very tall, up to 80 feet, with a trunk circumference of 16 feet. Most trees don't grow that tall, however, and heights of 15 to 18 feet are more usual. The trunks grow straight and high, with the first spreading branches growing far above the ground. The mature trunks from older and heavier trees have fluted, flattened ridges along the trunk which buttress and strengthen them. The bark is dark brown when young, turning dark gray as it matures with a rough texture, forming deep horizontal grooves.

They have a dense, dark green and spreading crown. The single leaves are elliptical in shape, up to 5.5 inches long and 3 inches wide with smooth or slightly wavy edges. Older leaves have a glossy, leathery look, darker green above and a lighter green below. Young leaves and twigs are covered with downy hairs. While they are young the trees don't lose their leaves, but as the tree gets older it will shed its leaves in early spring. New leaves will grow from June to October and be pinkish, orange or reddish in color.

Jackalberry flowers are small and inconspicuous. The fragrant, white to pale cream hairy flowers are separate genders, growing on different trees. The females grow singly on a hairy stalk while the males grow in clusters. The fruit only grows on female trees. The tree flowers during the rainy season, and fruits in the dry season.

The fruit of the Jackalberry tree is a favorite of many animals. The fleshy fruit is oval, almost round in shape and about 1 inch in diameter and yellow or yellow-green in color. Five sepals of the calyx of the flower remain on the bottom of the fruit, their tips curling backwards. Two to six wrinkled seeds can be found inside the fruit. The skin is tough but the edible fruit has a chalky, floury consistency with a lemon-sweet flavor. They can be eaten fresh or preserved. They are also dried and ground into flour. A beer and brandy is also brewed from them.

When the Jackalberry fruit is fully ripe, it turns purple, but one hardly ever sees it this color since it is eaten by various animals long before it can get that ripe. Animals such as kukus, nyalas, impalas, warthogs, baboons, parrots, and hornbills, to name a few, love to eat the fruit of the Jackalberry. It got its name because the Jackalberry seeds are also found in the dung of jackals. The leaves are eaten by elephants, rhinos, giraffes, buffaloes, and kudus. The larvae of the bushveld emperor butterfly also eat the leaves of this tree.

The Jackalberry tree is part of the Ebenaceae family, and is also known as African ebony. Wood from the tree is hard, heavy and very strong, and almost completely resistant against termites. The heartwood is fine-grained and good for floors, high quality furniture and pestels. It varies in color from light, reddish brown to almost black. The trunks are used to make canoes.

It is also traditionally used for medical purposes. Tanin is contained in the leaves, bark and roots, and acts as an astringent that helps stop bleeding. The tree is also supposed to have antibiotic substances that help heal wounds. A mixture made from the roots is used get rid of parasites like ring worm, and dysentery and fever. It is also considered a remedy for leprosy

Although Jackalberries aren't found in very many places outside of the savannas and savanna woodlands of Africa, they aren't in danger of becoming extinct eirher.