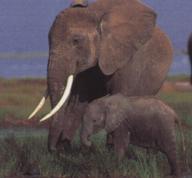 African elephants, also known as the savanna elephants, are the largest land mammal in the world. They weigh up to 10,000 pounds and grow to 12 feet tall. They have a long trunk that is very flexible and has nostrils on the end. It is used to pick up food and water and carry it to it's mouth. On the sides of its mouth there are two long teeth that extend out from inside its mouth. These are called tusks, and are made of ivory. They have thick, gray skin on their bodies that protects them from deadly predator bites.

African elephants live for about seventy years, and die when their molars wear down; they can't eat so they starve. There are usually 10-15 related elephants in a group. Related family members stay in close range of each other. The leader is always a female. They communicate with sounds lower than human hearing.

An elephant's gestation period is 20 to 22 months. When born, a calf weighs around 200 pounds, and is about three feet tall. A mother is usually helped by another cow during birthing. The calves nurse until they are in their third year and are very dependent on their mothers for 8 to 10 years. When they are mature, male elephants leave the herd to join bachelor herds. Females stay with the herd they were born into.

Elephants are very social animals, and learn about what to eat, where to find water and how to behave from their mothers and older bulls. Recently some orphaned bull elephants were killing rare rhinos in South Africa's Hluhluwe-Umfolozi Reserve. In a conservation effort several decades ago, orphaned elephants were moved from Kruger National Park to Hluhluwe-Umfolozi Reserve where there were no elephants. They grew up without the influence of their mothers or older bulls. It is thought that without role models they didn't know how to behave and were taking out their aggressions inappropriately on the rhinos. Older bulls were brought in to teach them how to behave themselves.

The African elephant's size makes them hard for predators to eat, such as leopards, lions, or jaguars. At night, the adults form a circle around the calves to protect them from danger. But in the day, an unlucky calf might wander away from the herd and be some predator's lunch. But adults have thick skin, making it hard to bite.

These animals have a special job in savannas. They keep the savannas clear by eating shrubs and trees which helps the grass grow. This allows the many grazers on the savanna to survive.

Today there are about 150,000 elephants in the world. They are endangered because poachers and hunters kill them for their ivory tusks to sell. In October 1989, the African elephant was moved from Appendix II, which requires permits to hunt or trade, to Appendix I, which is the highest level of protection and doesn't allow international trade.