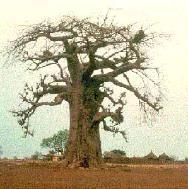 The baobab is found in the savannas of African and India, mostly around the equator. It can grow up to 25 meters tall and can live for several thousand years. The baobab is leafless for nine months of the year. If I were to describe the baobab, I would say that it looks like it has been picked out of the ground and stuffed back in upside-down. The trunk would be the tap-root, and the branches the finer capillary roots.

The Arabian legend of the baobab is that "the devil plucked up the baobab, thrust its branches into the earth and left its roots in the air". Another legend describes what happens if you are never satified with what you already have

"The baobab was among the first trees to appear on the land. Next came the slender, graceful palm tree. When the baobab saw the palm tree, it cried out that it wanted to be taller. Then the beautiful flame tree appeared with its red flower and the baobab was envious for flower blossoms. When the baobab saw the magnificent fig tree, it prayed for fruit as well. The gods became angry with the tree and pulled it up by its roots, then replanted it upside down to keep it quiet."

The baobab looks like this for a reason. In the wet months water is stored in its thick, corky, fire-resistant trunk for the nine dry months ahead.

The baobab's bark, leaves, fruit, and trunk are all used. The bark of the baobab is used for cloth and rope, the leaves for condiments and medicines, while the fruit, called "monkey bread", is eaten. Sometimes people live inside of the huge trunks, and bush-babies live in the crown.