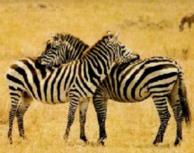 The zebra is the horse of the savanna. Grant's zebra is the most abundant of the 3 species of zebra. The zebra looks like a horse, only smaller. It doesn't sound like a horse, and "barks" instead of neighs. Its height is about 50 in. from shoulder to hoof, and weighs in at 500 to 600 pounds. It has rather short legs and a large head. The zebra has black and white stripes, a black nose, and black hooves. It also has a short, erect mane. The stripes on its side are vertical but bend to become horizontalon its rump. Every zebra's stripe pattern is different.

The zebra lives in close-knit groups called families or harems, led by a single male. There can be up to 17 members in each family. Everybody in the family relies on each other to look out for danger and help those who are in trouble. They stay close to each other even when they migrate in herds of 10,000 or more. They slow their pace for weak or young members and never leave them. They can live to be 28 years old.

When the zebra is attacked by a predator, it has several ways to defend itself. If they see a predator, the herd will bunch together and all the predator will see is a maze of stripes and it won't be able to tell one zebra from another and will not be able to tell it's front from it's rear end. Or a herd may run away. The zebra can reach speeds of up to 40 m.p.h. The male guards the rear. If all else fails, it will use it's strong hooves and sharp teeth against a predator. The zebra's main predators are hyenas and lions.

It is easy to see a zebra in the middle of the grasslands because of its black and white stripes, but the stripes actually confuse a predator. There are about 300,000 zebras left on the savanna. They are fun to watch and study. They may not be endangered yet, but two rarer species are. Some subspecies are actually already extinct. Like the other endangered animals, we must help the zebra and try to make it so it does not reach extinction.